Welcome to Episode 18!  So, if you’re the daughter of a famous homesteader, you’re destined to live off the land yourself, right? Today, you’ll find out what falls from the sky when a teenager rebels against the mother of modern homesteading.

So, imagine your mother wrote the book on Country Living.

In addition to bearing seven children in the 70s, Carla Emery also found time to write The Encyclopedia of Country Living.

That’s the first book that many wannabe homesteaders place on their mantles.

It’s a million word tome that’s on my bookshelf, and I’ve thumbed the pages of my copy until they’ve frayed.

But this isn’t a story about Carla. It’s the story of Esther Emery, Carla’s youngest daughter.

In a “back-to-the-land” era when it seemed everyone wanted to know how to make it in the country,The Encyclopedia of Country Living began selling like hotcakes. 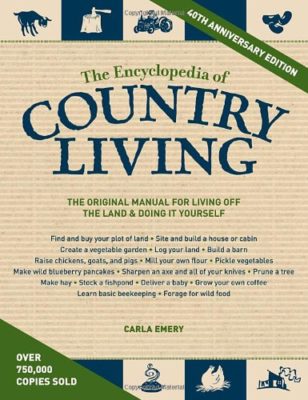 But Esther grew up on the latter side of that trend, as the go-go 80s and 90s saw Silicon Valley capitalistic values render the idea of homesteading as quaint and archaic.

When tragedy struck Carla’s family and resulted in her losing her homestead, Carla, the mother of modern homesteading, was forced to move to the city to homeschool her children.

As a result, Esther knew nothing of the life of open spaces and farm chores that her mother wrote about, and took a long and winding path through life to where she is today.

That path included battling bulimia, enrolling in a far away college at the age of 15, a career in theater in southern California and even a full year of self-imposed exile from the Internet, a story she chronicled in her new book, What Falls From the Sky.

After that year of exile she and her husband, Nick, felt a calling to return to their Idaho roots, where they have lived off-grid in a yurt for three years while Nick builds their cabin from timber he milled himself.

Now that Esther is baking bread in a wood stove, doing laundry with the help of a bicycle and fighting off bears, she is finding that the circle of life is becoming complete. She is becoming like the mother she rebelled against as the land has summoned her home.

It’s a great story of renewal and redemption that you won’t want to miss. Grab your coffee and listen in.

Make it easy on yourself and subscribe to the show, and you’ll never miss an episode of Self-Sufficient Life:

Thanks so much for joining me this week for Self-Sufficient Life. If you enjoyed this episode, please SHARE it using the social media buttons you see at the top of the post.