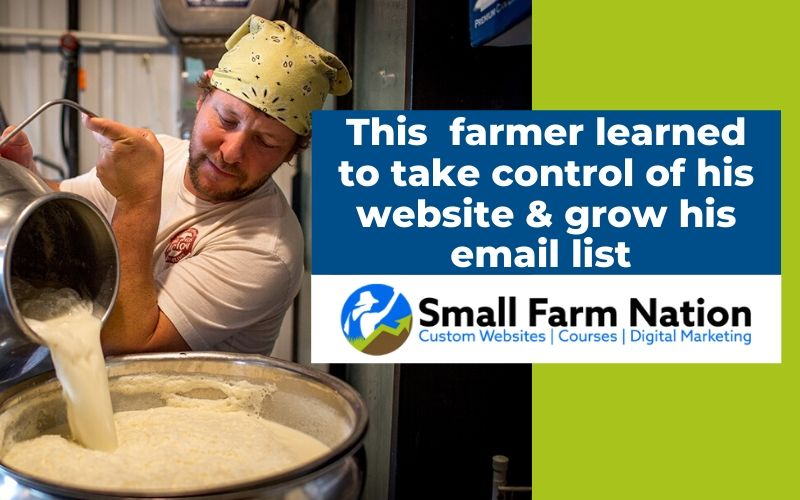 This busy farmer made time for marketing!

Ben Gotschall is a busy man. Working with his wife Tammy and their growing daughter Charlotte, Ben and Charlotte run two farming businesses.

Raising Jersey cows has been a passion for Ben since he was a boy.

“Even at that young age, I was serious about developing a top-tier production herd of Jersey cattle,” Ben says. “I set for myself the goal of having the highest-producing Jersey herd in the state of Nebraska. I bred my cows to high-production bulls and purchased cows and heifers from high-producing herds in the Midwest, and by 1997, as a senior in high school, I had the top herd in the state for milk.”

Ben established a small herd of Jersey cows, one of the top 10 small Jersey herds in the U.S. for butterfat production. He sold commodity milk to the Dairy Farmers of America, who picked up every 3 days. Like many dairy farmers at the time, Ben fed the cows a specially-designed production pellet in the parlor, and fed the heifers a heifer grower ration of corn. He kept their calves in individual hutches where they were fed milk replacer and calf starter pellets until they were weaned at 6 weeks old.

It was a classic high-input, high-production, low profit business, even when milk prices were attractive.  It was not a system designed to be profitable under unfavorable economic conditions, and it was not sustainable.  When milk prices dropped in 1998, Ben’s income from milk sales to DFA was insufficient to cover his cost of production.  He was faced with the infamous choice many small dairy farmers then and now confront: GET BIG, OR GET OUT!

Ben had to find another way.

Today, Ben runs Holt Creek Jerseys, where he sells Jersey cows, bulls and semen with organic, grass-fed and A2A2 genetics. To help market that business, he built a website with the help of Small Farm Nation Academy.

But Ben and Charlotte do more than raise cows. They milk them, too, and sell raw milk in Nebraska. They market raw milk, grass-fed beef and pastured pork through another business, Davey Road Ranch.

So, clearly, Ben has farming in his blood and has been around it all his life. But, like many farmers who transitioned to selling directly to customers, Ben discovered he needed to develop a new skillset.

He needed to become an effective marketer.

“Before joining Small Farm Nation Academy, I struggled with social media, creating a good website and email marketing,” Ben said. “But now I’ve learned how to design and maintain my website, and I’ve grown my email customer list and grown my social media/online presence.”

Ben has a tremendous amount of farming experience and has words of wisdom for new and experienced farmers.

“Knowing your financial numbers via accurate bookkeeping is vital to making timely and effective decisions on a farm. I wish I had outsourced my bookkeeping to a professional sooner so I could spend more time on marketing and customer engagement through my Small Farm Nation website and customer e-mail list.”